Looking Back: the Beamsville Aerodrome 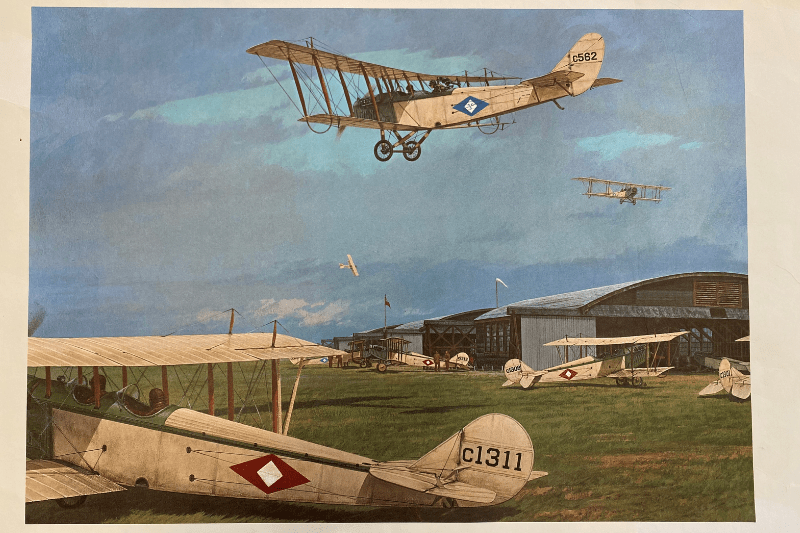 Built in 1917, the Beamsville School of Aerial Fighting and Gunnery was an important part of the war effort as a training site of the British Royal Flying Corps.

Known locally as the Aerodrome, the school was established to train WWI pilots. The camp was constructed on 282 acres of land on Sann Road, extending north from Number 8 highway to Lake Ontario. The school opened in 1918. Pilots practiced flying over the orchards and gunnery targets were set up in Lake Ontario. The officer’s mess was located in Senator Gibson’s home on King Street, in what is now a dormitory at Great Lakes Christian College. By late 1918, WWI had ended and the aerodrome was abandoned and forgotten. Only one building remains today.

This colour image is a reproduction of a painting by Robert W. Bradford, who was born in Toronto in 1923. The scene shows a Curtiss JN-4 (Can) aircraft and one Curtiss JN-4A at the School of Aerial Fighting in Beamsville in 1918. The painting was reproduced for the National Museum of Science and Technology in Ottawa. A copy hangs at the Rittenhouse Branch in Vineland.

Read an article about the Aerodrome in Niagara This Week.

See more historic images of the aerodrome on OurOntario.

Do you have a question about local history? Contact us!