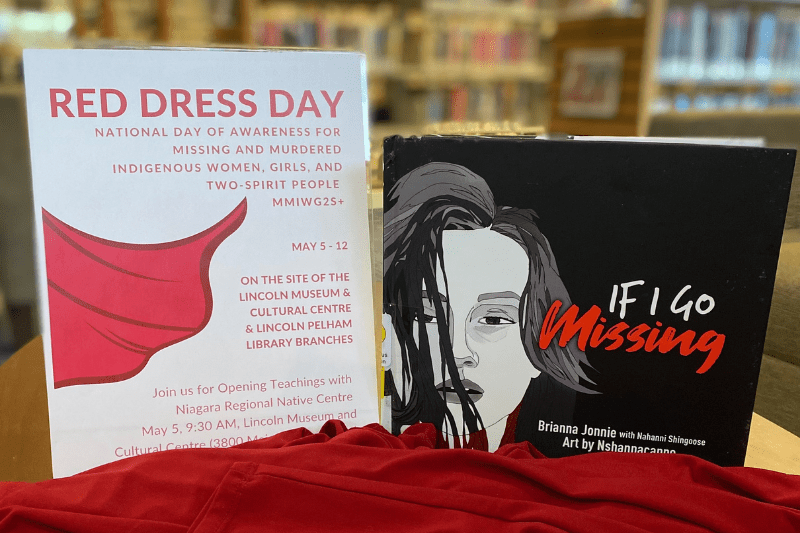 May 5 is the National Day of Awareness for Missing and Murdered Indigenous Women, Girls, and Two-Spirit people (MMIWG2S+) in Canada, also known as Red Dress Day.

Red Dress Day began in 2010 as the REDress project, initiated by Métis artist Jamie Black. The project brings awareness to the ongoing tragedy of race-based violence across Canada and the United States, which has resulted in thousands of missing and murdered Indigenous women, girls, and Two-Spirit people.

The REDress Project has since evolved into a national movement. Now, every year on May 5, red dresses are hung in public spaces around the country as a call for justice for the victims and their loved ones. The empty dresses are a visual representation of the pain and loss felt by the families of victims and act as stand-ins for the staggering number of people who have been murdered or go missing each year.

From May 5 – 12, the Lincoln Museum and Cultural Centre will host a Red Dress installation. Dresses will also be hung at the four library branches in Beamsville, Vineland, Fonthill, and Fenwick.

Join us for Opening Teachings with the Niagara Regional Native Centre on May 5 at 9:30 am at the museum site (3800 Main Street, Jordan). All are welcome.

There will also be a Red Dress Day walk in downtown St. Catharines beginning at 5:30 pm. The walk starts at St. Catharines City Hall and ends at the First Ontario Performing Arts Centre at 7 pm. Everyone is encouraged to wear red.

Current public data on MMIWG2S oversimplifies and underrepresents the scale of the issue, yet still demonstrates a complex and pervasive pattern of violence.

According to Assembly of First Nations from 2019:

According to the 2014 RCMP Operational Overview:

In 2019, the Final Report from the National Inquiry on Missing and Murdered Indigenous Women and Girls was released. The report makes over 230 calls for justice and concluded that the acts of violence against Indigenous women, girls and gender-diverse people in Canada constitutes genocide.

Here are some books and resources to learn more about this day of recognition and mourning.

Missing Nimâmâ
by Melanie Florence
Missing Nimâmâ is a story of love, loss, and acceptance, showing the human side of a national tragedy.

If I Go Missing
by Brianna Jonnie
A graphic novel about the subject of missing and murdered Indigenous people. Combining fiction and non-fiction, this young adult graphic novel looks into one of the unique dangers of being an Indigenous teen in Canada today. The text of the book is derived from excerpts of a letter written to the Winnipeg Chief of Police by fourteen-year-old Brianna Jonnie–a letter that went viral and in which, Jonnie calls out the authorities for neglecting to immediately investigate and involve the public in the search for missing Indigenous people, and urges them to “not treat me as the Indigenous person I am proud to be” if she were to be reported missing.

Stolen Sisters: The Story of Two Missing Girls, Their Families and How Canada has Failed Indigenous Women
by Emmanuelle Walter
An account of the author’s investigation into violence against Indigenous women in Canada, with a focus on two young women who have been missing since 2008.

Read Reclaiming Power and Place: The Final Report of the National Inquiry into Missing and Murdered Indigenous Women and Girls.

Watch Finding Dawn by Métis filmmaker Christine Welsh through the National Film Board of Canada.

If you are affected by the issue of missing and murdered Indigenous women, girls, and gender-diverse people and need immediate emotional assistance, call 1-844-413-6649. This line is available free of charge, 24 hours a day, 7 days a week.

National Inquiry into Missing and Murdered Indigenous Women and Girls